EXCLUSIVE: The Big Brazil Frost – And Why The World Is Running Out Of Coffee

Coffee producing regions across Brazil were hit with major damage following the most severe frost to hit coffee farms in 40 to 50 years last July, and complicating the outlook this followed the worst drought in over 90 years to hit a vast part of producing areas across the world’s largest coffee producer and exporter. In this special EXCLUSIVE analysis for the Global Coffee Report SpillingTheBeans’ owner and author Maja Wallengren explains how multiple problems are causing an unprecedented deficit to the supply-demand balance and why the world is running out of coffee fast. 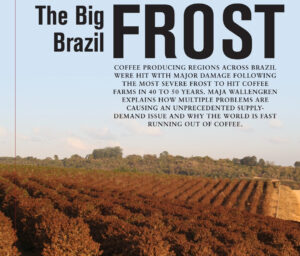 NOV. 3, 2021 (GlobalCoffeeReport)–Where bright green and lush fertile fields normally cover the heartland of Brazil’s coffee producing region in Southern Minas, instead a carpet of wilted and dead coffee trees stretch as far as the eye can see. More than 200,000 hectares of land cultivated with coffee were so severely affected by the four rounds of frost that hit Brazil between the end of June and July that only dry and brown leaves are left on the stems, a golden, crisp brown shade normally associated with the turning colour of leaves at the end of autumn. There is no prosperity left for these trees to recover, and in over 27 years of origin travels across the world, there has never been a sadder coffee sight to this reporter.

The evidence of damage is overwhelming. From Serra Negra in the state of São Paulo across the world-famous coffee towns of Guaxupe, Nova Resende, Muzambinho, Cabo Verde and Alfenas in Southern Minas, through Franca and Pedregulho in the Alta Mogiana region, and all the way to Patrocinio, the coffee capital of the Cerrado Mineiro region, there is no denying just how bad the frost damage has been, and there is no ignoring the severity of the impact.

“In the 54 years I have been growing coffee since taking over the family farm from my father this is the most intense frost I have ever seen, we have always seen sporadic frosts but up until now the impact was always minor,” Guilherme Gerardo Rocha tells Global Coffee Report during a visit to his farm Fazenda Santa Helena in Nova Resende in August. Casting his eyes first to the left, then making a full 360-degree round, he points to row after row of completely burned coffee trees: “This is dead, look at this,” he says and cuts a branch of a tree. “This is all dead. Everything is gone,” says Rocha, who lost between 80 and 90 per cent of his entire cultivated area.

In a different part of Nova Resende, small-holder coffee grower Jorge Paulino Silva strikes a heroic pose as he takes in the rapid decline of the dead and wilting trees on his farm. But when his eyes fall on the entire plot of tiny new coffee trees that were planted out in the field earlier this year and are now all dead, his voice cracks ever so slightly. “My whole life has been dedicated to growing coffee. As long as I remember, I have lived off coffee, and we have always had frosts, but not like this, not like this,” says Silva, his voice breaking.

Deep into the hilly roads in Nova Resende the story of damage and devastation to the coffee fields has no end in sight. From completely burned producing areas to farms where trees are burned unevenly, either with the upper part completely wilted but part of the lower branches still showing signs of some life, and others where the frost literally cut each row of trees in half with one side still green and the other entirely wilted. Even if most of the farms in Southern Minas have seen the frost cause damage to an average between 20 and 30 per cent of the cultivated area, for the recovery of the farms, between 30 and 50 per cent of the total land will have to be either pruned or replanted to ensure an even harvest cycle.

“The level of damage from the frost combined with the drought is the most serious problem we have seen to Brazil’s coffee sector for years and our growers are struggling,” says Evair de Melo, Senator for the second largest growing state of Espírito Santo. He logged more than 15 hours flying over frost-hit areas across 180,000 hectares in 90 municipalities from southern São Paulo to the northern-most point of the Cerrado.

“For the frost damage alone, we can expect to see a loss of at least 10 to 12 million bags to the 2022 harvest but this is adding to the continuing damage from the drought,” says de Melo, who is working with a special coffee taskforce at the Agriculture Ministry dealing with the multiple weather problems. 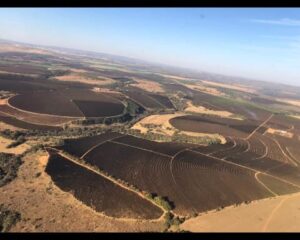 Brazil’s 2021 harvest was already forecast to come in significantly smaller this year after excessive stress from producing a record crop last year, which Brazil’s official crop forecasting agency Conab said reached 63 million 60-kilogram bags. The 2021 crop was initially forecast by Conab to reach 48.8 million bags as yields were expected to drop more than the average difference between a cycle with a big crop, known as the “on-cycle” to the “off-cycle” where trees are recovering. But following the growing impact of the drought, which hit the flowering last year and at this point, over one year later, continues to damage flowering prospects for the next 2022 crop, Conab has lowered its forecast for the 2021 harvest to drop 25.7 per cent to 46.9 million bags, one of the smallest crops in 10 years from Brazil.

“The problem is very serious because of the large deficit in rainfall between March and September which comes on top of the water deficit in soils and trees in the areas affected by the drought since last year,” says Marco Antonio Jacobs, a Brazilian economist who has worked with coffee trade analysis for more than 40 years. Agronomists and climate experts agree, saying the water deficit is running at less than 10 to 20 per cent of what is considered necessary to ensure a healthy flowering.

“What we are dealing with now is [whether there] will there be enough rain to halt further yield declines beyond what is already pretty much a given,” says meteorologist Mike Palmerino.

As fresh supply from Brazil continues to come down, the pace of exports will start to slow and…

Read the FULL report for FREE at; https://www.gcrmag.com/brazil-frost/
-0-