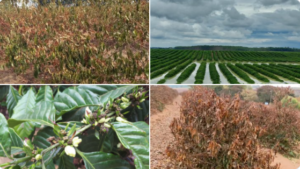 DEC. 10, 2021 (SpillingTheBeans)–Brazil’s next 2022 coffee harvest, for which the flowering season ended last November, is expected to be sharply down and reach a total of between 36.3 million and 39 million 60-kilogram bags, the Brazil Coffee Growers Association (Sincal) said in its first preliminary forecast for the next 2022-23 harvest season. Direct comparative figures were not available but the Sincal figure would be down between 16.8% to 22.6% compared to the 2021 production estimate of 46.9 million bags released last September by Brazil’s official Crop Supply Agency (Conab).

In a research summary shared with SpillingTheBeans the association said Brazil’s top coffee producing state of Minas Gerais, which only grows Arabica beans and in average crop cycles accounts for about 50 percent of the total national harvest and 65 percent of the Brazilian arabica crop, is expected to produce between 14.8 million and 16.77 million bags. Brazil’s 2nd largest coffee growing state of Espirito Santo, meanwhile, is expected to harvest between 13.8 million and 14.05 million coffee of which the majority consist of robusta coffee and a smaller balance of arabica beans, Sincal said in the report dated December 2021.

Coffee production in the next 2022 harvest from Brazil, the world’s largest coffee producing and exporting country, has for quite some time been expected to be severely reduced after over a full year of extreme weather disasters from the worst drought in over 90 years to the most damaging frost season in 40-50 years. The long list of negative weather impact to Brazil’s coffee regions – which agronomists and scientists attribute to climate change – has caused massive damage both to the coffee tree production cycle, reduced vegetative growth before the flowering, loss of vast areas in production because of the severity of frost damage and delayed and insufficient rains during the Sep-Oct key flowering period. This has been further aggravated by stress to coffee trees which caused unusual high levels of sporadic flowerings in June and July, which further cut the yield potential of the flowering short and combined with the ongoing water deficit resulted in a large-scale abortion of flowers due to severe water deficit in trees and soils, as well as defoliation from the ongoing drought. This week Brazil’s north-eastern coffee triangle of southern Bahia, north-east Minas Gerais and northern Espirito Santo was hit by new weather chaos as over two weeks of torrential rains caused massive flooding and growers reported additional crop losses. The full extend of the impact will not be known for several weeks.

Total Robusta coffee production in Brazil in the 2022 harvest is seen reaching between 11.98 million and 14.82 million bags, the chief agronomist-forecaster for Sincal told SpillingTheBeans in separate comments. This would be down between 9.9%-25.8% compared to Conab’s preliminary 2021 figure for robusta outut of 16.15 million bags. In Brazil robusta coffee is known as conilon. That would leave a balance for Arabica production at between 24.18 million and 24.32 million bags, which – also not in a direct comparison – would be down 21 percent compared to Conab’s September 2021 figure of 30.7 million bags in Arabica production.

Sincal agronomists traveled 8,000 kilometers and visited over 300 coffee farms across the three states of Espirito Santo, Rondonia and Bahia alone for the forecast and survey of robusta coffee production in the upcoming 2022 cycle, officials told SpillingTheBeans. Details of the number of farms visited for the Arabica forecast was not immediately available.