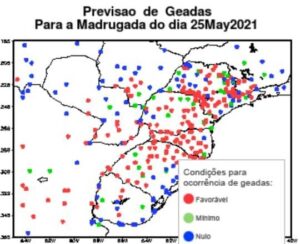 MAY 24, 2021 (SpillingTheBeans)–Coffee regions across many key producing areas in Brazi*Temperatures as low as +1-3°C hit coffee regions last week as Brazil enters main frost season
l, the world’s largest coffee growing country, will be blanketed by an intense cold front this week as the country enters its main frost season just as harvesting of the new 2021 crop is beginning in earnest, local weather forecasts show.

The intense cold front comes as growers already are dealing with the impact of a sharp drop in harvest output this year on a scale that Brazil’s crop forecasting agency Conab has said could produce the smallest crop in 10 years due to the combined effect of a severe drought and stress to trees last year following what was the largest harvest ever on record.

Cold weather hit coffee regions across the states of Parana, parts of Sao Paulo and the southernmost part of the key Southern Minas coffee producing region early Monday. Even though no damage to farms have been reported from cold weather so far this year growers and market observers agree the cold front poses a frost threat to both the new crop on trees as well as young trees. 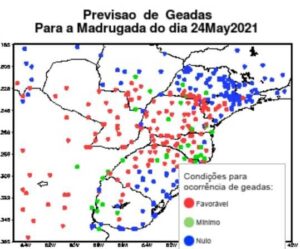 Last week temperatures as low as +1 to +3°C hit coffee regions in several parts of Brazil, which is also the world’s largest coffee exporter. Coffee frost can occur When temperatures dip below +3/+4 degrees Celcius, at which point ripe coffee cherries and leafs can suffer damage and, if exposed for several hours or longer, can result in such severe impact that the damage turn into crop losses.

Stay tuned for more updates as SpillingTheBeans continues to monitor events and as we get more details from our coffee friends in Brazil.
-0-

FASCINATING FACT – How Did Coffee Spread From the Origin in Ethiopia To The World?
EXCLUSIVE: Coffee Culture Booming In Middle East As Tradition Blends With Modern Ways